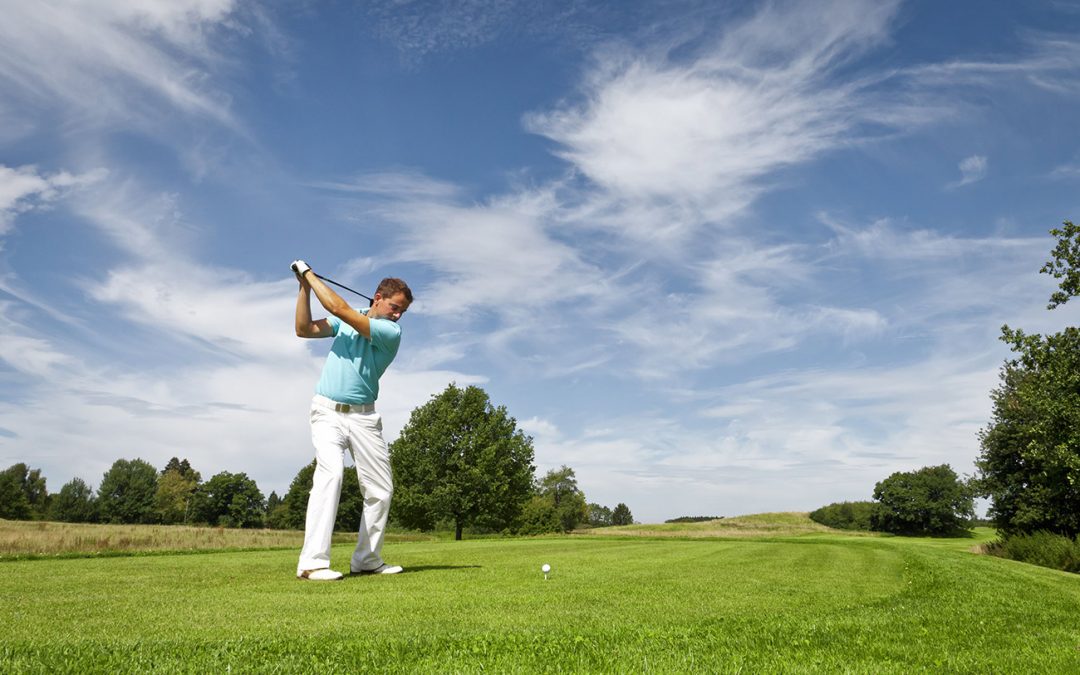 The Northern Beaches of Sydney are blessed with many golf courses and great year-round weather for playing on them. Participation levels and member numbers have declined slightly in recent years, but studies show it’s still one of the top sports. It can be a fantastic form of low impact aerobic exercise, assuming the golfer walks the course, rather than sitting in a buggy for 18 holes. Unfortunately, it is also one of the top sports for injuring its participants.

According to a 2013 Golf Australia report there were 1.18 million golfers in the country, with 70% playing at least once a month. Another report found that 16% of Australian golfers can expect to sustain a golf-related injury every year. Doing the maths, that means roughly 180,000 golfers will get injured playing the game they love in this country over the next 12 months.

So what kinds of injuries are common from playing golf?

Well, it’s a popular theory that most golfers will experience back pain at some stage. One study in particular reviewed a year’s worth of golfers’ injuries and found that 18% were in the lower back, 17% in the elbow and forearm, 12% in the foot/ankle and 11% in the shoulder/upper arm. It is unclear where the other injuries were sustained – perhaps they were to the liver and brain…in the 19th hole!

So what is it about the game of golf that causes most injuries?

Typically, an amateur golfer gets injured because they don’t adequately warm up, are in poor physical condition to start with or swing the club in such a way that it places excess stress on the body. You’re in real trouble if it’s all three!! You can rest assured though that a good osteopath can help you with two of the three above – you might need to see a golf professional for help with the swing!

A 2007 report for the American Journal of Sports Medicine gives a good insight into why golf causes so many injuries – it showed that almost half of all golfing injuries occur during the swing and a large proportion happen during impact with the ball. This is not surprising when you consider the forces exerted on multiple muscle groups and joints in the neck, back, arms and legs. The average golf swing is completed in less than 2 seconds. In this time, particularly when driving the ball off the tee, the golfer is trying to impart maximum power onto the ball. Amongst amateur golfers there are many types of golf swing and, in fact, with any one golfer, the swing can vary during a round depending on the type of shot they’re playing and/or their mindset when weighing up the shot. A smooth, consistent swing is recommended to avoid injuries.

All golf swings place increased pressure/load on keys parts of the body, however, and do so over and over again during a round, causing common injuries. Let’s examine a few to understand what’s going on.

Every golf swing involves a rotation of varying degrees of the pelvis. Ligaments, tendons and muscles in the lower back are pulled as torque is created between the lumbar spine and pelvis. In golfers of middle to late age, the flexibility and durability in the spine and vertebrae may have deteriorated. It is common for discs between the vertebrae to wear away when there is a pre-existing disc lesion that the swing aggravates. Most lower back injuries are strains from the golfer going for a more powerful than usual swing and this can affect golfers of all ages. Speak to an osteopath if you are suffering from lower back pain or think you have a pre-existing back problem and are considering playing golf. Ensure the back is well warmed and loosened up before play and try to keep your swing smooth and consistent.

Shoulder injuries among golfers are common and damage to the rotator cuff is one I see a lot, because of the torque placed on this part of the body in powerful, repetitive swings. Additionally – and unique to golf – is the way each shoulder has a very specific and opposite manoeuvre to perform during the swing. The leading shoulder (left in a right-hander) is typically kept close to the body (an adducted position) at the top of the backswing, while the other shoulder (right in a right-hander) is placed away from the body (an abducted, externally rotated position) at this point. When a golfer plays several times a week they can perform as many as 300 swings of the club and this difference in shoulder position and forces exerted on it, can lead to rotator cuff injuries, shoulder instability and impingement.

It is widely believed that playing golf for 18 holes (walking between shots and carrying or pulling the clubs) places more stress on the knees in particular than jogging the same distance. When you consider that golf courses are rarely flat and a bag of golf clubs is rarely light in weight, this is easy to appreciate. Add to this the stress that an average swing places on the knees (bending, rotating and absorbing weight from above) and you get a sense of how much work they do in a round of golf. If they are not in good condition going into the round, then chances are they will be the worse for it coming out the other end! Speak to an osteopath if you have pain in your knees from playing golf and they will assess the injury and determine a plan for recovery.

Golfers injure their elbows so commonly that “golfer’s elbow” has become a well-known term for it. It is an injury to the muscles that flex your wrist and fingers. It occurs when more force is applied to these muscle groups than they can handle. If you grip the golf club firmly through the swing and impact with the ball and ground, you could be prone to this particular injury. The pain will be located on the inside of the elbow joint – where muscles attach to the bone, known as the medial epicondyle. It is also the term used to describe injuries that involve gripping equipment for sustained periods such as chain saws, chopping with an axe or using other types of hand tools. Pain on the outside of the elbow is more commonly referred to as “tennis elbow” and is common in golfers too. A right handed golfer will often experience pain on the outside of their left elbow and vice versa for a leftie. Experts believe this comes from “cupping” the wrist at impact with the ball, otherwise referred to as releasing the wrist too early in the swing. Both injuries can be treated by an osteopath with a good success rate, but rest is also essential to improve chances of recovery.

Additionally, it is worth considering that injuries can also occur on the golf course from the following:

If you are suffering from golf-related injuries or are thinking about taking up the sport and wish to have a health check to ward off any injuries that the sport might bring on, book in with the Willow Clinic. We are less than five minute’s walk from Warringah Golf Club and a short drive from Manly, Wakehurst and Balgowlah Golf Courses.