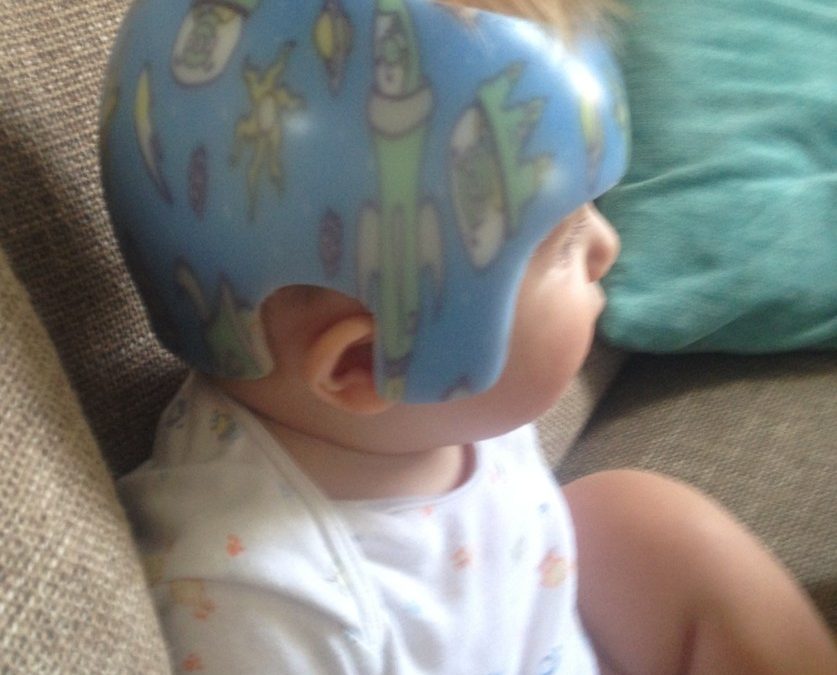 Positional Plagiocephaly, more commonly known as Flat Head Syndrome and Torticollis (neck stiffness on one side), have become more prevalent since campaigns (like the one introduced in Australia in 1991) started encouraging parents to position their children in a supine sleep position to help reduce the incidence of sudden infant death syndrome.
Having two young boys of my own, who both developed misshapen heads during the first few months of childhood, I have a personal and professional interest in this subject and thought I would share some of my experiences.

When my eldest son was born he was of an average weight and had the perfect head shape. He was delivered by forceps and had some initial molding of his skull which corrected itself within days. He had a huge appetite and grew very quickly. Because of this it took him a long time to be able to sit up unaided, so spent a lot of the time propped up on a pillow, in a bouncer, or lying on his back or front. This, along with regular journeys in a buggy and a car seat, meant he spent long periods of time with the back of his head pressed against a firm surface. At around three and half months, I noticed one side of his head flattening. His ear on the flattened side was further forward and higher than the other and his forehead began to bulge forward on one side. I began to see signs of him favouring a head position, for example, looking to the right when asleep and when turning to look at me.

I decided to seek some medical advice which unfortunately was not very helpful. My GP told me not to worry about it and that it would correct itself. I was not satisfied with this, so as a concerned mother and as an osteopath, I decided to do more research into the condition and to seek alternative advice. I could tell it was quite severe and had tried repositioning his head during sleep times and some cranial osteopathic treatment. Neither of these worked, so I decided to see an Orthotist (qualified professionals who deal with and manage orthotic care for people who suffer with physical and functional limitations caused by a variety of disabilities and illnesses). At the time my son was four and a half months old and I knew that this was a good time to get it checked whilst the cranial bones were still malleable.

This was not a decision I took lightly, as I knew it was going to be costly but felt the result would outweigh the cost. I went to see an Orthotist in the UK to find out just how severe the plagiocephaly was and what my options were. Below is some of the information I was given during the initial consultation.

Before you can go ahead with the orthotic band (head prosthesis), specific criteria need to be met for your child to be deemed suitable for the treatment:

1. The problem is positional plagiocephaly and not craniosynotosis (a restrictive condition where there is a premature closure of one or more sutures of the skull)
2. The fontanelle is palpable or it is determined that the sutures are open
3. The level of deformity is in the moderate to severe range
4. Repositioning/ and other intervention has not brought about significant improvement
5. The child’s neck strength is strong enough to withstand the orthosis

After this consultation we decided to go ahead with the treatment as we knew this was our only option having explored others with no real success. The whole process involved great commitment on our behalf. The first week for us as a family was the hardest as it is where you slowly integrate the wearing of the band into the baby’s daily routine. For example, On Day 1 the band is to be worn for 1 hour on, 1 hour off, for 4-5 hours and is not to be worn during napping or overnight. On Day 2, the band should be on for 2 hours, off for 1 hour for 6-8 hours. By day 5 the band is on for 22-23 hours of the day and is only taken off twice in the day for cleaning and during bath time. We attended weekly appointments to get the band checked and altered as his head changed shape. This continued for 4 months where we had seen a dramatic change in my son’s head shape. We reached the point where there was 3mm of difference between the measurements and we were very happy with this result. We decided to remove the band and never looked back. He is now four and his head shape is so much better than it would have been without the band.

My second son was born much smaller than my first but also grew very big and again developed a misshapen head but this time it was different as he developed brachycephaly. This is where the head is wide in relation to its length and appears to be flat at the back. From our previous experience we decided to intervene as soon as we could and had him checked out at three months old. Because the type of misshapen head was different to our eldest son, head measurements were taken differently (cranial width multiplied by 100%, divided by the cranial length). It was worked out that my son’s measurements were 100%. With 78%-89% considered normal to mid-range and 95% or more being severe, we had confirmation that we were once again dealing with a severe case. We had the band fitted and it once again worked a treat, but took a little longer. He wore the band for six months and the process seemed to develop much more gradually. The changes on a weekly basis were more subtle. The end result was, in fact, better than my eldest and his head is now near perfect.

If you are concerned about your child’s head shape get it checked out, do not leave it. Up to seven months of age the cranial bones are very malleable and it is therefore a good time for changes to be made through repositioning. A misshapen head doesn’t mean your child will require an orthosis if intervention is done early reducing the likelihood of the flattening progressing further.

Here are some useful tips to think about to help to minimise or to reduce the changes of your child developing a misshapen head.

Flat head syndrome/plagiocephaly is a common condition in babies and osteopathy may be able to help your child. Please contact The Willow Clinic today for more information.