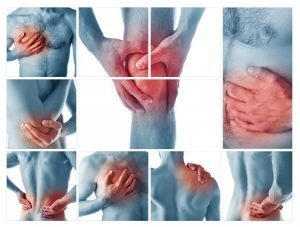 Fibromyalgia (FM) is an unpleasant condition of generalised and often heightened pain in the muscles and tendons of the body. Diagnostic criteria list up to 18 symmetrical tender points on the body but, in fact, the condition often includes a wide range of associated signs and symptoms, such that it is often referred to as a Fibromyalgia Syndrome.

Some of these associated symptoms are feeling so tired that normal activities are affected, having problems sleeping and memory loss. Other symptoms such as sensitivity to light, noise and temperature and numbness and tingling sensations have also been reported.

A list of the signs and symptoms of Fibromyalgia:

The cause of fibromyalgia is not yet known, but perhaps the strongest theory suggests that a period of psychological stress or illness can cause abnormalities in both inflammatory and stress pathways which regulate a person’s mood and pain sensitivity. It would certainly be supported by the regular coexistence of fibromyalgia with neuropathic pain and major depressive disorder.

There is significant co-occurrence of fibromyalgia with hypothyroidism, rheumatoid arthritis, systemic lupus erythematosus and scleroderma. It occurs 9 times more frequently in women than men and at any age, though most commonly between 30 and 60. There is also some evidence that genetic factors play a role in a person’s predisposition to fibromyalgia, but more research is needed in this area.

These conditions prevent the body from repairing and self-healing in the normal way and thereby can trigger a “cascade” of the above symptoms as the body’s normal regulatory mechanisms gradually go more awry.

Osteopaths may be able to help with both diagnosis and treatment of fibromyalgia. A thorough osteopathic case history will allow the osteopath to understand the range of symptoms and, through assessment of movement and gentle touch, the osteopath will be able to gauge the state of the tissues and how to treat appropriately for relief of symptoms.

Osteopaths are highly aware of the role of the autonomic nervous system in health and illness and have many gentle and effective ways of interacting with it to rebalance neurological tone and stimulate the healing process.

If you have widespread, chronic pain and perhaps some of the symptoms listed above, you could be suffering with fibromyalgia and should consider making an appointment with Vanessa Fisher at the Willow Clinic for diagnosis and a range of osteopathic treatment options.